A CELEBRATION to mark the installation of three new pieces of public art in Whitley Wood is to be held involving some of the local people who feature in them.

The three sculptures which form the Whitley Wood Album incorporate photographs of a local football team, dinner ladies and pupils from a nearby school.

The project, which involved the local community, was funded by retailer Tesco as part of their social contribution after constructing their nearby distribution centre.

Artist Bruce Williams, who created the Oscar Wilde Memorial Walk behind Reading Prison, was commissioned by the Council to produce the new pieces of public art.

Children from Geoffrey Field Junior School, who feature in one of the sculptures, and members of the local community who have been involved will be attending the celebration on Friday 11th May.

Mr Williams will also be present to give short tours of the sculptures and talk to people about the stories behind them. 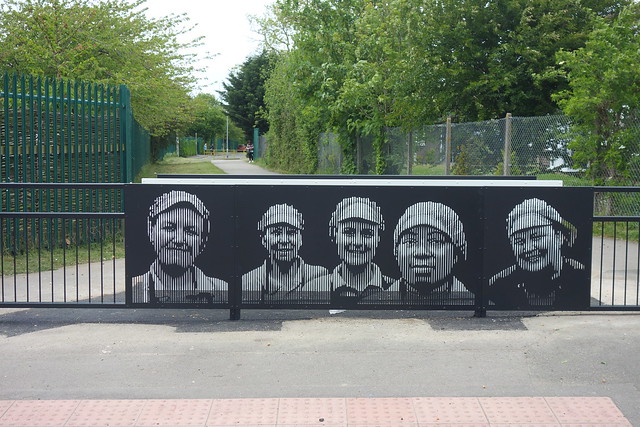 2.      A group of Whitley school children and their head teacher on the Engineers Arms Roundabout.

3.      Local football team Rabson’s Rovers at the Rabson Recreation Ground, where they used to play.

The artist visited coffee mornings and local events to ask residents what Whitley Wood means to them and sourced old photographs from the Whitley Community Museum.

“Rabson Rovers was established in 1942 with John Rabson Recreation Ground being its home pitch until the late 1990s.

“They were however much more than a football club and were a key community organisation which ran cricket, badminton and table tennis teams. They also organised fishing competitions, day trips and holidays to Butlins with a savings scheme.

“Sadly Rabson’s folded in 2009 but the memories live on in the hearts of many Whitley people. This art tribute will support the telling of many a tale we are sure.” 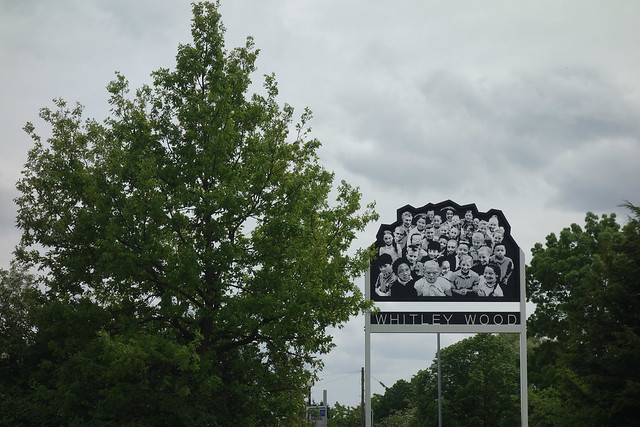 “Whitley is a strong and tight-knit community and we are proud that Geoffrey Field Junior School sits within the heart of this.

“Not only are Bruce Williams’ sculptures amazing pieces of artwork, they are a great celebration of the spirit of Whitley and I’m really pleased that children have been included in one of the pieces.

“It’s especially important for us at Geoffrey Field Junior because we place a great emphasis on pupils understanding from a young age that that they not only live within a community but they have an important part to play in contributing to their local area and making it a great place to live.

“The artwork on the Whitley Wood roundabout features some of our amazing Year 6 pupils who are obviously very excited to be part of this fantastic project. When Bruce first described his vision, we didn’t imagine how incredible the finished pieces would be – we’re delighted with how they turned out.”

“The most important aspect of this project was that it involved local people and that the pieces of art were relevant to the area.

“The result is three stunning installations which capture the history and the spirit of the community of Whitley Wood.”

“I really like the fact that these pieces of art are unique to the area and have Whitley Wood running right through them.

“Credit to artist Bruce Williams for producing artwork which reflects the many hours he spent with members of the community working on this project.”

Tesco contributed £81,800 for public art in the area as part of the s106 agreement for its warehouse distribution centre in Imperial Way, south Reading.  The agreement also secured £250,000 for works to the A33/Imperial Way roundabout to mitigate the effects of the development and a further £323,076 towards transport infrastructure improvements. Tesco was also required to put together an Employment and Skills Plan to create work opportunities for residents during the construction of the distribution centre and within it.

Bruce Williams was commissioned by Reading Borough Council with the Arts Council of England to create Oscar Wilde Memorial Walk in 2000, consisting of two gates with the image of Oscar Wilde, railings incorporating poetry by Paul Muldoon, three love seats and a stone bench the same size as his prison bed.

The Whitley Community Museum provided photos from its collection for the art project and their Facebook page, with a membership of more than 1,500, allows people to share their stories and memories of the area.