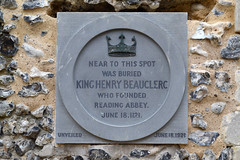 A PLAQUE marking the burial of King Henry I, youngest son of William the Conqueror, in the Abbey Ruins, has been recreated in anticipation of the site’s opening on 16th June.

The plaque celebrates the important fact that the abbey, founded by Henry in 1121, was the final resting place of the king and his Queen Adeliza.

Near to this spot
was buried
King Henry Beauclerc
who founded Reading Abbey
June 18.1121

It has the decoration of a bronze crown set into the stone above the text.

It was first installed on 18th June 1921 as part of the 800th anniversary of the foundation of Reading Abbey by Henry I in 1121.  It is located on a wall of what was the part of the abbey church (now the wall of the Forbury Day Nursery) facing the ruins of the south transept.

The original plaque was in a very poor condition, with the stone and lead lettering beyond repair due to serious water erosion of the entire surface.

As part of the restoration work, a protective stone shelf has been installed over the plaque to prevent future water damage.

Lewis Proudfoot, Stone Section Manager, Cliveden Conservation, said: “The recreation of the Henry I plaque marks the culmination of over two years of involvement with the Reading Abbey Ruins project. Our team of conservators have helped consolidate the remains of this hugely important abbey, ensuring that they stay standing for future generations to visit for centuries to come. We hope that our enthusiasm for the preservation of historic buildings enables others to learn and appreciate their importance, and maybe play a part in the future conservation of these and others like them.”

The re-opening festival coincides with Water Fest, Reading’s annual celebration of the town’s waterways. There will be a host of exciting activities and performances throughout the day, including the chance to meet King Henry I and other historical characters from the Abbey Quarter.

Cllr Tony Page, Reading’s Lead Member for Strategic Environment, Transport and Planning, said:  “The team at Cliveden Conservation have done an excellent job of recreating this important plaque. As a town, I think we should be extremely proud that Reading was the final resting place of Henry I, the son of William the Conqueror.

“We know that Henry I was buried in the royal abbey that he founded in Reading. As part of this project we hope to celebrate this fact and also bring to life in people’s minds the lavish scale of what in the Middle Ages was one of the major Benedictine Abbeys in western Europe, and a regular place for royal visits and events.”

Cllr Sarah Hacker, Reading’s Lead Member for Culture, said: “People will get a chance to inspect the plaque up close from the 16th June. The Abbey Ruin’s reopening, coinciding with Reading’s popular Water Fest, will be the must attend event of the year! I’m sure, like me, many local people cannot wait to explore and enjoy the ruins again.”

Historically, the Abbey was one of the most important religious buildings in Europe, often visited by pilgrims and nobility from throughout England before its dissolution in the 16th Century.

Since the abbey’s closure this site has faced much disruption from being blown up during the English Civil War to Victorian looting. As a result, it is a mystery whether Henry is still buried here in Reading.

The ruins closed in 2009 as they were no longer safe to be open to the public. After 9 years and thanks to £1.77 million funding support from to National Lottery players  and the Heritage Lottery Fund and match funding of £1.38million from the Council, the ambitious project to reinvigorate Reading’s pre-eminent and nationally important heritage site will be complete.

Images of the plaque are available from Flickr https://flic.kr/s/aHskC4srgL

Henry I, youngest son of William the Conqueror, founded Reading Abbey in 1121 intending it to be his burial place. He died in Normandy in December 1135 and was brought back for burial in January 1136.

His body was embalmed and sewn into a bull’s hide for the journey to Reading. Stormy weather in the Channel delayed the crossing to England by four weeks. His body was eventually brought up the River Kennet to the Abbey’s wharf.

Henry was buried in front of the High Altar, the most prestigious location for a burial. The tomb did not survive the destruction of the Abbey after the Dissolution in 1539. During C19th archaeological investigations a piece of carved stone was discovered, reused in the Abbey’s precinct wall. This may be part of a twelfth century sarcophagus. It is just possible, though it can never be proved, that this might originally have formed part of Henry’s tomb.

Reading Abbey Revealed is a major project, made possible through £1.77 million funding support thanks to National Lottery players and the Heritage Lottery Fund and match funding of £1.38million from Reading Borough Council.

People can keep up to date with the project by visiting the Abbey Quarter’s website www.readingabbeyquarter.org.uk   Facebook Page www.facebook.com/ReadingAbbeyQuarter   or by following them on twitter @RdgAbbey

For further information about the re-opening festival on 16 June visit the website www.readingabbeyquarter.org.uk/whats-on/reading-abbey-revealed

Thanks to National Lottery players, we invest money to help people across the UK explore, enjoy and protect the heritage they care about – from the archaeology under our feet to the historic parks and buildings we love, from precious memories and collections to rare wildlife. www.hlf.org.uk   Follow them on Twitter, Facebook and Instagram #HLFsupported.