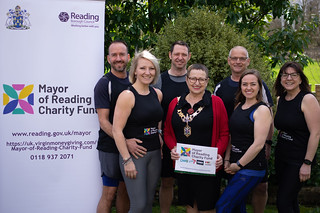 THIRTEEN runners will be supporting the Mayor’s chosen charities when they take part in the Sage Reading Half Marathon this Sunday (17th March).

A team of seven made up of Reading Borough Council staff and their friends and family will be making up the ‘Mayor’s Magnificent Seven’ while the Mayor’s daughter, Lucy Neal, will be running with a team of five friends and family members. 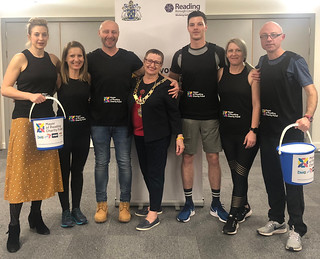 The Mayor’s Magnificent Seven includes a member of staff from Adult Care & Health Services and two members of the Council’s Housing Needs team.

Ms Neal and her squad run as part of the Tadley Bootcamp team who will be competing in several running events this summer to raise funds for a range of charities.

All the runners will be raising money for the Mayor of Reading’s Charity Fund this Sunday and anyone can make a donation and post messages of support at https://uk.virginmoneygiving.com/Mayor-of-Reading-Charity-Fund.

“I’m thrilled to have 13 magnificent runners raising money for my chosen charities in the Sage Reading Half Marathon.

“So many good causes benefit from this wonderful event every year and I am delighted that my four charities will be among them.

“I would like to send a big thank you to my half marathon runners and to all the generous individuals who have sent a donation to my charity fund.”

More than 13,000 people will be taking part in the Sage Reading Half Marathon this Sunday (17th March) with runners ranging from elite athletes to enthusiastic amateurs. The 13.1 mile course starts at Green Park, takes in the University campus and town centre before finishing inside the Madejski Stadium.

A full route map of the half marathon can be found at http://www.readinghalfmarathon.com/ under the ‘Race Info’ heading.

A series of rolling road closures and diversions will be in place at a variety of times between 7am and 4pm on 17th March. A full list of roads affected and approximate timings of rolling closures can be found at: www.reading.gov.uk/halfmarathon.