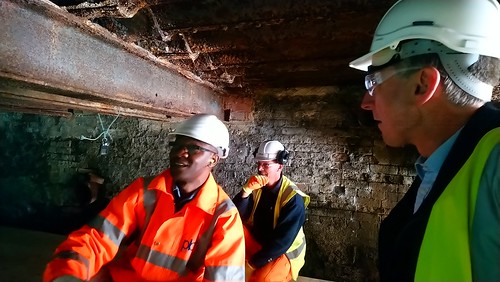 WORK to strengthen a century-old town centre culvert under which the Holy Brook runs has started and will continue over the next three months.

Abbey Square Culvert carries Abbey Square over the Holy Brook river in Reading Town Centre. Estimated to be more than 100 years old, the steel deck beams have unsurprisingly corroded, meaning additional steel deck beams are now needed to support the road surfaces above. Repairs are also being carried out to the brick arch and brick abutments which form part of the culvert.

The Abbey Square culvert, located directly outside Reading Central Library, is one section of a longer culvert that runs between Kings Road and Duke Street. Other sections of the culvert also require strengthening work and this work will take place later this year.

Councillor Tony Page, Reading Borough Council’s Lead Member for Strategic Environment, Planning and Transport, got a closer look at the repair works on a recent visit to the site.  He said: “The Council has now begun work to repair the Abbey Square culvert, which has unsurprisingly deteriorated over 100 year period. These strengthening works are now essential to ensure there is sufficient capacity in the structure to carry traffic above for decades to come.

“Other sections of the culvert, along nearby Kings Road and Duke Street, also require repair and further strengthening work will take place later in this financial year.”

To enable the strengthening works,  the exit from Abbey Square onto Kings Road has been temporarily closed. The one way restriction on Abbey Square is instead suspended to allow all vehicles to exit via Abbey Street.

Holy Brook is a channel of the River Kennet that flows through Reading. It is thought that while some parts of the channel are natural, other parts were created in mediaeval times by the monks of Reading Abbey to supply water mills and fish ponds.

The channel is nearly 10km in length, of which approximately 600 metres are culverted. In the centre of Reading, the Holy Brook is culverted for several stretches, only showing itself intermittently. The channel can be seen where it flows under one of the entrances to the Oracle shopping centre, where it has given its name to the ‘Holy Brook Mall’. Once it has passed under the Central Library, the Holy Brook re-emerges at a point where it once formed the southern boundary of Reading Abbey. Here the brook provided the driving force for the Abbey Mill.

For media enquiries about this release email oscar.mortali@reading.gov.uk or call 0118 937 2301